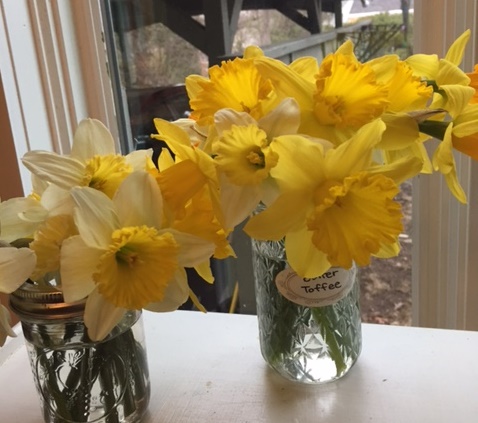 The final Sunday dawns, in a season of anticipation, and the last candle is lit.  A circle of glowing, those four candles form; anticipation intensifies. Those who found the feasts find themselves kicked into hyper-drive. All last minute details must be accomplished–the cleaning, the last bit of baking, the clothes for the parties. Stocking stuffers must be bought or crafted and wrapped accordingly.

For some others–for dreamers, believers, lovers, and children (who oftentimes are all of the other three), time opens out into a fluid, pristine pool; it flattens and extends. There are wonderful tasks to take care of: a carefully chosen gift to wrap for a beloved teacher. The sparkling bauble to be picked up at the jeweler’s–both gift and signal of commitment to a whole new level of bonding. Packages arrive, delivered by the harried but cheerful UPS person,–packages that need to be swept off the steps and into the house before anyone else notices their arrival.

Some prepare for travel, a careful time of careful packing; they bear important treasures that can’t be left behind.

There are special dishes to be made–that cheesecake that has the sweet tart cherries and chopped cashews and carved chunks of dark chocolate swirled into its creaminess, maybe. The store-bought sandwich cookies dipped into melted chocolate and drizzled with glaze, finished with sprinkles. The meat that must marinate for 48 hours. The pasta that must be carefully stuffed. These important tasks become a focus.

For those that celebrate Christmas, this week becomes a time of readying, in both physical and spiritual senses. It is a special, solemn prelude to a special, hopeful joy.

There are those who celebrate the holidays who also tend to other things.

The week before Christmas can be both sacred and ordinary time.

It is his first Christmas without his wife of fifty years; she passed in the spring, and slowly he has been learning what life is like–and how to live it–without her. But Christmas–this was her holiday. She knitted and sewed for months before; she decorated every nook and cranny. She was especially invested in personal gifts; the thought of sticking cash in an envelope or tossing a gift card someone’s way was anathema to her.

He has tried to honor her spirit, and he has shopped for the kids and grandkids. He hopes he has done a good job,–done it for her, almost with her. But it has been a trudge through viscous muddy swamps and not a joyful journey. Next year, he thinks, he’ll learn to order on-line and avoid the piped-in music, the raucous crowds.

He has put up the tree, and hung the ornaments, aching, by himself. He has put a wreath on the door and dug the holiday dish towels out from where she always kept them. Just that much exhausted him.

His kids are great; they call and visit, and his dance card is filled for Christmas Eve and Christmas.

But this final week, when all the rest of the world seems to be gearing up and frenzied, he stays home at night, and he turns the TV on, looking for an old war movie or a murder mystery. Tears fall through a haze of cigarette smoke. He wishes the holiday would just be over.

He’d been so sure that all was well–Wouldn’t I know, he thought, that something was catastrophically wrong? Wouldn’t my body tell me?

Apparently not. The doctor had been gentle and caring but very, very clear. The treatment options. The prognosis. The time he probably had left.

His wife had wanted to come; he told her, Nah, it’ll be fine. Why waste your personal time?

He doesn’t know if he wishes she were here, or if he’s glad she isn’t.

This, he thinks, is probably my last Christmas.  A kind of numbing sets in and he puts the car in gear.

But in some ways, she thinks, this is much, much harder.

****************************
The expectation of the miracle is the gleaming heart of the season. It shines through child eyes and through the eyes of those newly in love. It thrums like a rhythm through the secret tasks of busy parents. It carries the grandparents, readying their house for an onslaught of celebration, through their holiday chores. This is, and it should be, a time of great joy.

But there are some for whom the miracle has receded, whose hearts are made heavy by their inability to share in the joyful preparation. Anticipation transforms into dread, and they bear the guilt of being unable to fling themselves into the preparation.

We light our candles and we sing about city sidewalks and we dust the ceramic baby Jesus in his finely crafted manger. We feel the surge: oh, the holiday is coming: coming fast. The light cracks open the darkness; it’s all happening again.

It is the week before Christmas; We anticipate the joy. And we pray,–ah, we pray and open our hearts to,–those for whom the joy, this year, will probably not come.

9 thoughts on “‘Twas the Last Week of Advent”

This site uses Akismet to reduce spam. Learn how your comment data is processed.

The Joy of Slow Travel

The Balancing Act of My Life

Psychologist on the Run

An old dog CAN blog

A place where words come alive

Little Writing on the Wall

Diary of an eye resident doctor. Follow my journey.

Walking as a Way of Life

Making My Home A Haven is important to me. Sharing homemaking skills. Recipes and food. Bible Studies. This is a treasure chest of goodies. So take a seat. Have a glass of tea and enjoy. You will learn all about who I am.

My journey through the depths of hitting rock bottom and how I faced my fears and have started to turn my life around.

The Musings of a Writer / Freelance Editor in Training

Autism in Our Nest

We are a loving family. Autism is just a part of who we are.

A NEW WAY TO LOOK AT WHAT MATTERS

My experiences in Italy and the world

The Actions Needed for Mastering Your Motives

whenlifeawakens.com/
Larisa Harper, Ph.D.
What Next: Behind Roo's Ruse

Is it destiny, happenstance or stratagem?

because the story must be told

Pain goes in, love comes out.

The Book Reviews You Can Trust!

Forty Something Life As We Know It

Life is a journey

MY MASHED UP LIFE

music, books and other important stuff

Walking the Line Between Creativity and Practicality

Author of "Agency in the Hunger Games"

The Recipe Hunter
Our Daily Scraps